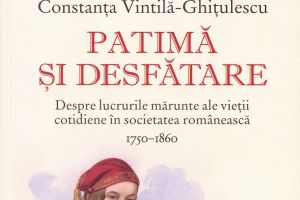 The author proposes for the educated reader or for the one who is only passionate for historical writing an incursion in the collective imaginary of “ the first Romanian modernity”,  through a language that mingles scientific rigor with fictional subtlety, offering an attractive lecture about the everyday life in yesterday’s world, representing diversely: food, social prestige and life, body hygiene and beauty, odors and parfums, parties and anguish or the allegorical trip to “burial ground”.

A history of private life involves a scientific challenge and an interdisciplinary treatment of the theme, invoking anthropology, ethnology, sociology and mass psychology, in order to retrieve aspects of existence less reflected in current historiography.

The methodological approach of Ms.Constanţa Vintilă-Ghiţulescu, PhD in History and Civilization at École des Hautes Études en Sciences Sociales du Paris subscribes the historical philosophy of Oswald Spengler, through the courage of imagining the little stories of the past as parts of general history.

“Passion and Feast” provokes not only the reason but also the senses, as an new form of introspection of an era of lords, ladies, slaves and inhabitants of slums, “testing smells, odours, sounds, music, colours, sceneries”, with the help of these distinguishing attitudes, gestures and positions identified behind a vocabulary inspired from the fascinating far East.(Orient)

In the dawns of modernity, Bucharest , Iași and the Principates over all, were illustrating in everyday practice tributary rituals towards their political and juridical statute. Nevertheless, the nargileh, which accompanied the coffee and jam served daily with piety, was enjoyed in the silence of the lord house and became an imposing performance when the ceremony was led by ottoman officials.

The byzantine role model in the Romanian culture, as Nicolae Iorga said “Byzantium after Byzantium”, as a follow up of the imperial values, was predictively replaced with the ottoman one by the local boyars, as a form of legitimacy in front of the people and as an idea of authority, into a world’s order which seemed established for ever.

“Halitosis and odours”, as oxymoron, becomes an olfactive image as symbol of an strongly polarized social world, as an archaic pyramidal structure of power, with routines, pleasures and specific anguishes, finished inexorably in the arms of the ruthless Thanatos, “in the ordered place” of faith.

The charm from the language of the era hid cultural habits long gone, placed in the middle of the oriental paradigm and the western one, occidental, perceptible in the Romanian culture starting the XIX th century , when habits and fashion changes, as shown in the verbal manner: Turkish words like “musafirlacurile” or “egledisirile” transforms into “ballrooms”, “saloons”, “conversation” or “waltz” , opening a fascinating world, which quivered on certain level of life’s desire.

On level of culture and civilization, cultural models passes by and are assimilated in a natural way, by boyars and traders, rather preoccupied of pleasures and consume, as a mark of social position, rather than of creating genuine values.

Food, beyond its well-known biological function, reaches ritual values, which illustrates “ipolipsis” and a way of living, mirrored in the proverb: “the gipsy gets food when he receives some, the Romanian when he is hungry and the boyar when the chef desires”. In this nice fictional image of history, children had their own image of food; during summer they were starring at the fruit from the churchyard but never ate any of it because that fruit was touched by “the dead’s grease”, this is how priests warned them full of Christian piety.

In a world of hunger and disease, peasants’ frugality contrasted with the rich and frequent tables of the boyar, a real pantagruelic feast, among the 12 dishes during one meal. In the Roznovanu house in Moldavia, the sweets list included dozens of kilos of sugar, honey and rose petals, water lily petals, cherries, peaches, blackberries, plums and many other fruit, highly guarded as immense values.

The feeling of sacred, as shown in the countryside world through keeping the four Lenten periods of the year, was disturbed only by the trade with wine and brandy, that became by the mercy and care of the hierarchs the Church’s monopoly, even if it was well-contested by the peasants, due to economical or bachical reasons. The village, autarchic on all its levels of existence, offered practical solutions, written in the medical calendar and folklore, to moral and social problems which confronted their community, such as “drunkenness” “treated” in Moldavia butter and three chicken eggs which were kept earlier for nine days in a tomb. History never mentioned any proof of the viability of such empiric practices, nevertheless, it is a certitude that the ignorance and superstition which built the rural imagery, with some extension in contemporaneity.

In the extra-Carpathian Romanian space, characterized by an agrarian way of life, strongly rooted into tradition and Church, identifies “ the processing of the body, simple gesture education, the control of basic instincts”, a slight opening towards the elite’s modernization, which selectively integrated in their lives the European etiquette.

Hygiene,  the intrinsic component of the road to modern civilization, found itself diversely mirrored in the imaginary, depending on the historical period, class differences or house customs, proving once more that water was not an easy acquisition, from the point of view of paddled prejudgment: “fear of getting a cold, intimate indecency, non-existent direct links between health and cleaning, the bad quality of water and its insufficiency … , the habit of relating bath with a crossing ritual”. The bathing, relaxation and pleasure for a part of Bucharest inhabitants, or lust and prostitution for people from slums, shows the lack of understanding of the role of water, even for those who were using it.

This is the moment when the doctor transforms into a very important character, however rarely seen in the image of the period, and permanently in conflict with superstition, morbidity and lack of elementary rules of hygiene. When facing the doctor “repent, undress, complain, give up on something” was inconceivable for the rural person, backed up in his refracting attitude by the local authorities, “the leader” or the priest, who saw as a threat for his leading position in the community and classified as useless any sanitary trial, because good, evil or healing can occur only in the presence of the Shepherd King. Consequently, had more “faith in riddles, demons and mags; they believed all diseases came from the devils and, when bad things happened to them the appealed to shamans or old ladies, to release their pain through scratching and incantations”.

The boyars house or the poor hut from the slum’s streets, had the same immobility concerning any “physiological needs” , operated in the courtyard, away from the house, where the toilets were placed poetically named as “walkers” or “privates”. The rejection attitude towards this facility with modern feature had its origins intro widely spread conviction that it was nor right to defile the house, as animals do, becoming a mental common reflex during the XXth century too.

The daylight or nocturnal anguishes of the premodern people, found an escape route into “parties”, which allowed “bodies to meet”, in the ludic universe of love.

The epicurean life of the boyars or the daily struggle of the poor on the streets of the village or slum, was somehow united under the sign of “predictable death”, an occasion of sorrow, reflection, inheritance for relatives of joy for baggers. The performance of “the crossing” was different according to “the position, wealth, times”, yet, no one left this world without a last performance which brought the event to community’s attention.

Social order accompanied even death, because it did not feel right that the vanishing of the ranked not to be detailed in the pages of newspapers, while the poor ones had only one row in the newspaper, because he died like a “fool” on the street. And due to the fact that death was as expensive as life, being put in order by the Christian tradition “sărindare”, memorial services, the poor left this world hoping that the good and merciful God would put him too in “ the place of light, and green, and rest, where from the pain and grief fled”. The poor, the baggers, the prostitutes, the newcomers were taken to a common hallow, leaving for the Lord their identity problem, whereas the boyar’s body, was taken to a church yard or monastery in very expensive clothe ready to meet the Creator.

In this times presentations, the cause of death is often a mutual one, “of bad heart” or “headaches”, in a world struggling to isolate death from the living space.

Death as a performance, resignation and profit, offers a scene where the scatologic fears mingles with magic rituals of pre-Christian essence in a perpetuum-mobile of good and evil, as a dichotomy of human exitance.

I enclose recommending Mrs. VintilaGhitulescu’s book as history fresco and proof of a fascinating world, placed at the edge of two worlds of culture and civilization, which in the colours, lights and shades of the epoch illustrated the hedonist life, together with the permanent struggle for surviving.